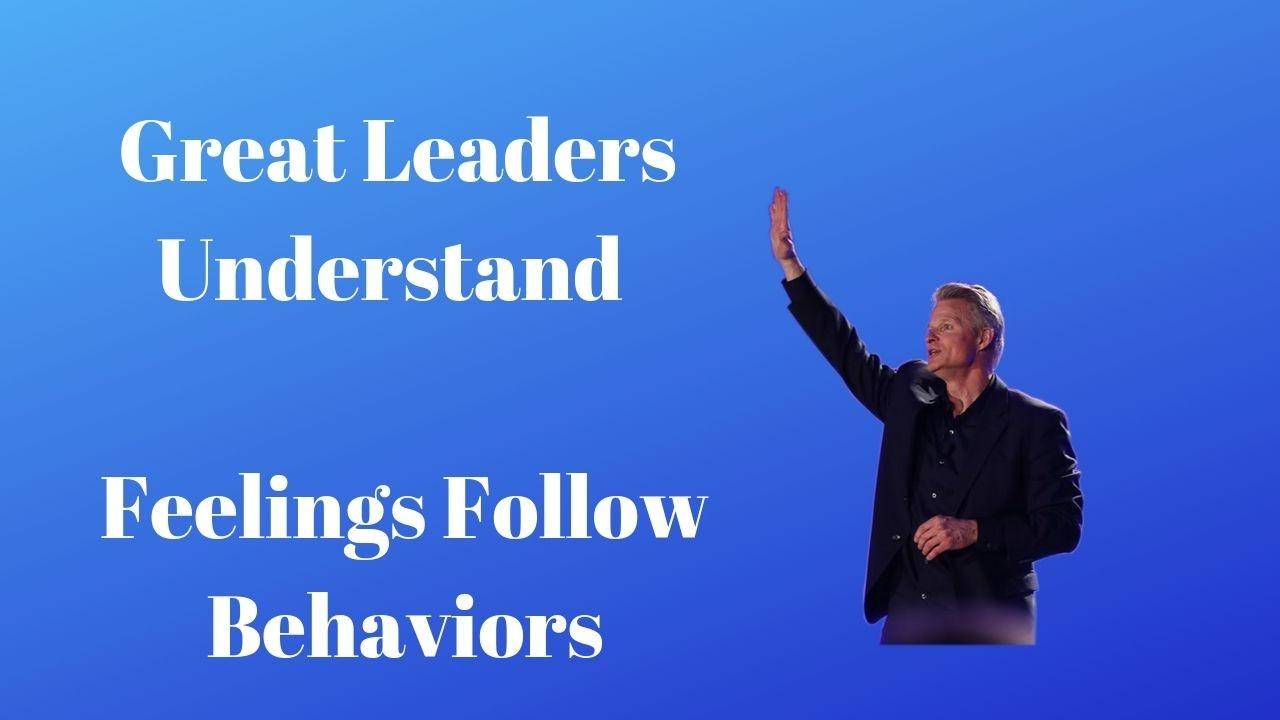 “Behavior wags the tail of feelings…..We do, then we feel.”

How many times in your life have you said you will finally get to something that you have decided is important to complete when you “feel like it”?  I know I have.

My weekly project list can be littered with things I have noted as important enough to have put my attention towards; but have remained incomplete.  While some of our mundane tasks do not bring with them a penalty for their incompletion, the problem I see is we often apply this way of thinking to the things we have identified as being the most important in our lives to complete.

The phone call we need to make, the conversation we need to have, the project we need to complete, the book we want to write, the nutrition or exercise regimen we know we need to begin, all get put off until we “feel like” starting them.

However, as one of my teachers once asked me, “What does feeling like it have anything to do with it?”

Deciding to take action in a new venture often has a way of bringing forward our feelings of fear.  The fear of failure, the fear of being exposed and even the fear of success often comes present as we move out of our comfort zones to experience expansion.  When we feel these fears, it can be uncomfortable and paralyzing.  Relying completely on the feelings of discontent to pass before we take action is not the path to success.

As a dedicated student and athletes of the martial arts, I did not always feel like training.  I did not always feel like stretching or kicking pads or doing forms (classical exercises) or sparring.  However, what I found time and time again, was the simple act of taking the first step in my training, despite how I was feeling, provided the momentum I needed not only to complete my training but to enjoy it.  Actually, when I felt the worst at the beginning but made the choice to move, I usually netted the most productive and enjoyable workout experiences.  The motion served as a catalyst to create positive emotion and feelings.

I once heard a story of an elderly gentleman who had seemed to defy the laws of aging.  In his early nineties, he still possessed a strong and lean frame with well-defined chest, biceps and triceps a teenager would a be jealous of.  His legs and back were solid as tree trunks, yet flexible and supple.  A full, albeit thinning, head of white hair still donned his head, and he lived with the vibrancy of someone a fifth of his age with a bright smile and twinkle in his steely blue eyes.

When asked what his secret was for his amazing physical vitality, he matter-of-factly stated, “I made promise to myself over 70 years ago that each day I would do at least one push-up, one sit-up and one jumping jack.” The questioner looked puzzled and the old man continued, “I knew that the first one was always the hardest, but if I could just get myself going, the rest would be easier.”

A popular concept in the personal development world is to take “massive action” when undertaking a project or dealing with a life challenge.  While this can definitely be effective, I have found that this is often a reason for many of us not to move at all, as we become intimidated on the vastness of the task at hand, and as a result, stay frozen in place (or at least until we feel like it, which may never come).   I have come to understand that success is most often attained through small, but consistent action (baby steps) done over time that lead to massive results.  In this practice, “feeling like it” has nothing to do with it.  Rather, we take action just because we said to ourselves (or others) what we would do and put in place mechanisms to encourage and support our actions.

In 2013, after years of procrastinating and waiting to “feel like it”, I finally undertook and completed the writing of my book, Black Belt Leadership – 7 Keys to Creating a Life of Purpose by Discovering Your Inner Champion (from which this blog is inspired).

A book that was instrumental in inspiring me to finally take action was Steven Pressfield’s gem, The War of Art . In it, he speaks about the Resistance that all writers (humans) face in the wake of undertaking a new challenge.  His following passage not only inspired me to begin this project again, but importantly schedule a daily writing regimen, despite how I felt.

“Someone once asked Somerset Maugham if he wrote on a schedule or only when struck by inspiration. “I write only when inspiration strikes,” he replied. “Fortunately, it strikes every morning at nine o’clock sharp.””

Maugham didn’t wait until he “felt” inspired. Rather, as Pressfield puts it: “Maugham reckoned another deeper truth: that by performing the mundane act of sitting down and starting to work, he set in motion a mysterious but infallible sequence of events that would produce inspiration, as surely as if the goddess had synchronized her watch with his.”

The completion of my book felt tremendous.  To this day, it is one of the accomplishments of which I am most proud.  But what I realized is that it never would have taken place had I not consistently gone into action, especially on the days I didn’t feel like it.  What I clearly learned through this experience is……….

So, what about you?  What is something important in your life that is staring you down that you are avoiding and waiting to take action on until you feel like it?

As I write this, I am asking myself the same question.

As we venture into this unknown, here are four practices I believe we all can enact to move through our resistance and lead ourselves into powerful creation and making the difference in our lives, and the lives of others, we were designed to deliver.

So, what can you get started on TODAY to make this week not only productive, but a catalyst for positive feelings inside of you?  Only you can truly create these positive feelings.  And remember, what most champions intuitively know………

Receive a FREE DOWNLOAD of my "Top Ten Big Ideas to Become a Black Belt Leader" to live your life by design!

Subscribe to receive your weekly "Mind of a Champion Tip of the Week" Blog!